skip to main | skip to sidebar

An Interesting Day at JFK

Today is a day that I have been anticipating for months.
Planning and preparing for, day dreaming about in class, envisioning with a corresponding ear-to-ear grin…
The day I left for San Francisco to see my nephew, Oliver.
So as my cab speed through Manhattan like I was in the middle of a high-speed chase, and my sister broke out into a hysterical sob next to me – I have to admit I got a bit worried. Spending the night in JFK airport sleeping on a bench was all too familiar to me to let it happen again.

Everything seemed to be going right. I had a lovely brunch this morning at Baltzhaar with Josh, I picked up 2 new books to read on the plane, my chronically late sister even arrived at my apartment on time! The only error was that I didn’t have any plane-snack for the 6 hour flight ahead. But in true Alison fashion, my sister had researched not only the in-flight-dining options for Virgin America, but also all the food options in the Terminal 4 of JFK, and our arriving terminal in SFO.
Nutty? A bit! But also kind of genius.

My cabbie buddy, Quatar, was right on time to pick us up to make our 4:55 flight. But unfortunately, we hit MASSIVE traffic heading out to the airport, and it soon became clear that there was no way we were going to make it.

Alison began to PANIC. Tears, rage, yelling at my pal Quatar for taking the mid-town tunnel, and finally turning to me and shouting “WHY ARE YOU NOT UPSET!” Had I been thinking, I should have been video-taping this whole scenario for later blackmail. But instead I calmly called the airline and got us on the stand-by list for the later flight.
Crazy sister, calm sister. You decide who goes with which.

The mania finally ended at 4:25, when we pulled up in front of JFK. Leaping out of her door before the cab had even stopped, Ali went to grab the luggage and into the terminal she sprinted. It was of course – too late. The baggage check was already closed. But, for a mere $50 we were able to confirm seats on the 6:45 flight …..done! Anything to get to little Oliver.

Why is it that so many airline check-in workers are rude? It’s like you have to meet an unfriendly criteria before you are given the job! This particular charming airline woman tried to tell me my carry-on was oversized and had to be checked!
Pardonnez-moi?
It was a CARRY ON! I am used to getting to the baggage check and hearing “oversized” – but that’s with my enormous case - and because it usually weighs around 70lbs, and even looks oversized. It could easily fit a human. Maybe 2.
But a carry-on bag?!!

She wheeled my little pink case over the bag check area and said it was sticking out an inch over the edge. Mind you – I carried this bag on every other flight no problem – even Ryan Air! I wasn’t going to let some sassy airline woman rip me off and make me pay $25 for a bag that was clearly acceptable. That money could go towards shoes! Or jars of nutella!
Looking back, I should have never bought pink luggage. It’s like a red flag for Elle-Woods treatment. Just because you’re blonde and like pink, people assume you’re stupid. Well, she messed with the wrong blonde. I transferred my PINK laptop from my case to my carry on so my case didn’t puff out at much, zipped it back up in front of her, and wheeled off. Blonde head held high in the air.

So with 2 hours to kill until take off, Ali and I decided to explore JFK.
Terminal 4 looked oddly familiar. I wondered... “Is this where I slept with Traci when we missed our connecting flight to Paris and had to live in the airport for the night?” I remember the devastation I felt of loosing a day of our trip, the uncomfortableness of trying to sleep on a metal bench, and the irony of waking up that next morning in front of an Au Bon Pain when I was supposed to already be at a boulangerie in Paris! But the only faux-french thing in sight was a little food stall called the Upper Crust, “famous French baguettes!” Intrigued, I wandered over as Ali went to get a latte. When I saw the baguette sandwiches were pre-made, and had ham and cheddar instead of ham and guyere – I left. Clearly, they were not fresh, and clearly they were not French.

I joined Ali instead at Pete’s Coffees and Teas! Way to get in the spirit of San Francisco, as it’s a local fav. I was happily sipping my mocha freddo when I saw it…. the au bon pain. OUR au bon pain. Awwwww the memories of my first trip to Paris with Tre! I contemplated buying an imitation croissant as a memento, but then remembered the freddo in my hand. And how awful imitation croissants are! I snapped this photo instead. 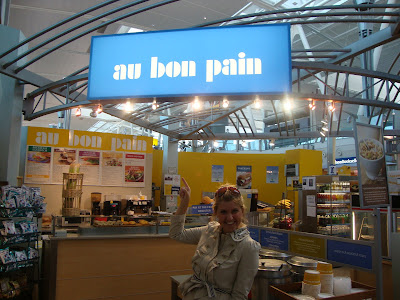 I was not this happy the last time I was there. 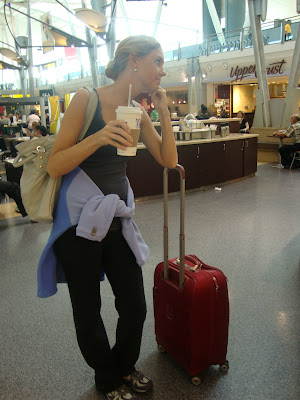 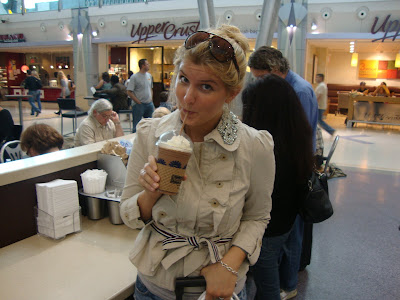 While I am fully enjoying my delightful freddo!

After a latte and finding a new edition of USweekly featuring the Real Housewives of New York City on the cover, Ali was back to her normal self, and we headed for the gate to board. 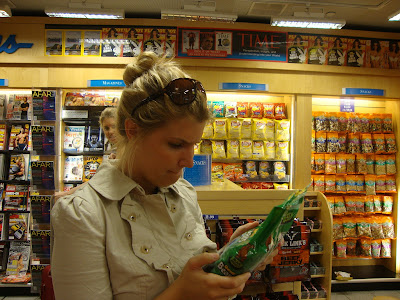 Stopped at a store and almost bought a 1lb bag of Gummy Bears for a plane-snack. 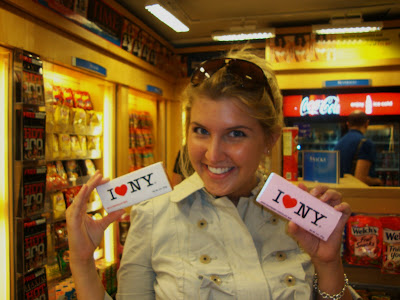 Then I found the I love NY chocolate bars... 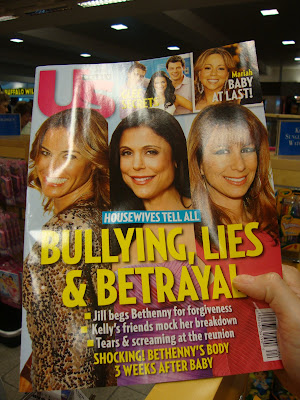 The plane looks like a nightclub, and the stewardesses like rock stars. Our greeting attendant was clearly going for an Amy Whinehouse look. Beehive and all. 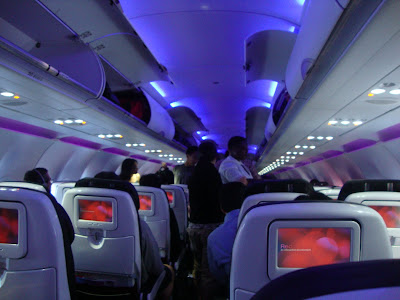 The inside of our night-club flight.

I love reading plane manuals, so I quickly learned I had several unique in-flight options for entertainment on my personal mini screen! Including but not limited to: video games, movies, satellite tv, shopping, food menus, reading, and even IM chat with other passengers! How freaking cool is that!? And useful! For example…

(Possible IM chat:)
Me: Hello! Passenger seated in 15A?
15A: …..yes?
Me: Hi, I noticed you ordered the lemon chicken wrap. Is that any good?
15A: …um… what?
Me: It’s just I can’t decide what to eat. I saw them deliver the wrap to you and I wondered if it’s any good?
15A: Yes, it's fine.
Me: Hmm, interesting.... Do you think I could maybe have a bite to see if I like it?
Virgin Atlantic Notification: PASSENGER 15A HAS BLOCKED YOU FROM THEIR CONTACT LIST.


As tempting as getting to know my fellow travelers was, I plugged in my computer and opted for the $12 WIFI. Nothing passes time like Facebook-creeping!

But as for now I’m off to tune into the tube. Ali has rented “When In Rome” – because we just can’t seem to get enough of terrible chick flicks set in Italy. Soon we will be in San Francisco, and since I am still on New York time, and it’s nearly midnight - Joyeux Anniversaire to my adorable nephew Oliver! He is 1 year old!
Posted by Blonde in the Big Apple at 8:50 PM

Blonde in the Big Apple
Parisienne at heart, but trapped in the United States - I've decided to make the best of living in my second favorite city, New York.